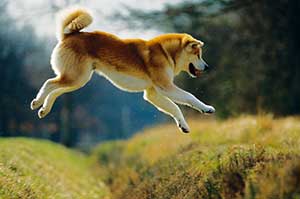 Dogs with character and strong personality. Akita doesn't have many patterns that many have in their mind for a companion dog. Their instinct probably finds its roots to his ancestors who were either hunters or guards, two partly conflicting jobs but in which the dog had to make decisions and act.

This characteristic gives the impression sometimes that the Akita does not pay attention, as like you don’t exist. For this reason it is not recommended for owners who can not devote the necessary time to build a strong relationship with their dog. If this relationship is not built, then this dog will end up as a permanent "wild teenager" with habits that may be fatal. 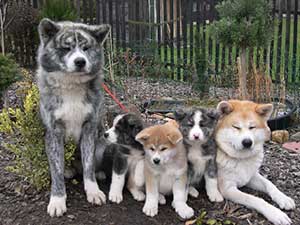 It's usual for akitas to be selective with people, generally wary of strangers and can become aggressive without distinct warning. The socialization of the Akita is absolutely necessary in all phases of his life. Contact with animals that are balanced and would not express aggressive instincts is highly recommended. The same applies to people because behind their sweet appearance hides a very powerful and potentially dangerous dog, the Akita should be accustomed to be petted. As a puppy must learn to bite gently as he would if he learned it while growing up with his brothers. Trainers with puppy classes can be of great help. The adult Akita rarely coexist harmoniously in a park with other dogs and even more rarely will participate in dog sports. You would say that he sees everything top-down with a dose of arrogance. 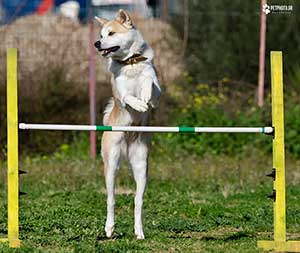 They’re highly intelligent but rarely do anything to satisfy humans, they will usually do something because it pleases them or because we encouraged a particular behavior. It takes a lot of effort and persistence to reach your objectives with an Akita and to make him really trust you. The hunter instinct is very intense and you need to restrict it as much as possible in order to avoid unpleasant situations. For the same reason the Akita should always walk on a leash.

The training of an Akita under NO circumstances should include violence of any kind.
CAUTION: Not a common a dog and methods with choke chains, shock etc. MUST be avoided. The goal is always a strong bond with your dog and not violent "correction." The Akita is not our humble servant, we are his life companion and we must constantly prove that we deserve his love and respect. 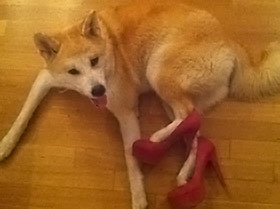 We could say that they are accommodated easily. The toilet theme is solved kind of automagically without much effort from the owner. Without being highly energetic, the daily walk is essential.
He's clean as a cat and has no intense smell.
This dog loves to live with his family. An Akita abandoned in gardens, plots, probably will develop into an independent, difficult to handle and sometimes dangerous animal. The whole family need to be involved in training and caring. It is extremely likely to become disobedient and possibly dangerous to those who he does not respect.He is not mischievous if going to daily walks and has its own games which we hide and rotate regularly to avoid boredom.

NEVER leave an Akita alone with young children, tolerance to teasing and intense discomfort is a rarity in Akita.

A daily brushing with cuddly is enough in order to keep the coat in great condition.

Usually Akita shed heavily twice a year, during these periods there is a need for intensification of grooming because the hair amount excreted is great and for many probably annoying

Perhaps one of the most "serious" dogs, he wouldn’t be characterized particularly playful. He has its fun moments but gets bored easily. 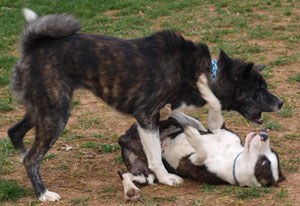 It is common for the Akita to exhibit an aggressive nature to other animals of the same sex in particular but also in some cases towards humans. Recent researches into Akita’s DNA showed that males who exhibit strong aggression have some gene that reinforces this behavior. Their aggressive trend and wrong upbringing has led many countries to integrate them in the list of "dangerous dogs."

Caution, according to recent studies, the aggression is not associated with dominance.(related article) In Akitas this could possibly be explained by their history as dogfighting dogs.
Generally the widespread theory of pack leader is outdated, modern scholars argue that dogs are not as intelligent to comprehend  hierarchical structures and manage resources as a "leader" would.

Living with other animals 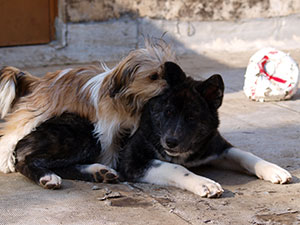 Generally there is a difficulty in cohabitation with other small sized animals, the Akita is somewhat difficult to socialize and should not be left alone with other animals that he is not familiar with. Of course there are several cases where an Akita tolerates other animals such as cats, which usually had already been in the house when the puppy came.

With other dogs things are easier especially if they are of different sex. In the majority of cases it will require considerable effort from the owner to enforce and maintain harmony and balance in the home.