Google sabotaging akitas, or, we do it? 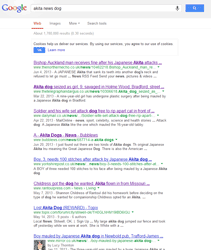 Today I was doing my regular googling for interesting information about akitas , So I searched for "akita news dog" and selected the option to fetch only last year's results. Unfortunately I didn't come up with any interesting news or information, instead I was surprised by the number of results in the first page which were related to akita attacks, 5 out of 10.

Here are the disappointing results I got in Google's first page : (Click for screenshot )

- Mar 22, 2013 - A nine-year-old girl has undergone plastic surgery after being mauled by a Japanese Akita dog in Bradford.

- Apr 22, 2013 - MailOnline - news, sport, celebrity, science and health stories ... Attack dog: A Japanese Akita like the one which mauled the 16-year-old tabby

- A BOY of three needed 100 stitches to his face after being mauled by a Japanese Akita dog. (Same as previous story)

- Jan 11, 2013 - The three-year-old was mauled by a huge Japanese Akita at a local pub and needed 100 stitches to repair the damage to his cheek.

So, what does this mean? Are akitas aggressive, owners irresponsible, maybe both. What can we do about it?

We love akitas but we hate the irresponsible owners who make every akita dog and owner look bad.