The myth of alpha dogs 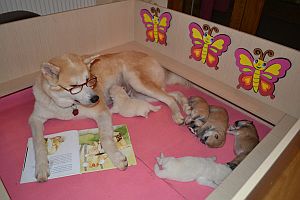 I remember reading books years ago that talked about the need to be the “alpha” in your house in order to keep good control of your dog. I read about the importance of “alpha rolling” the dogs to show dominance, to always go through doorways first, and to always eat before feeding the dogs. It was considered important for humans to show dogs that we were in control, we were dominant in the relationship, and we were the “alphas” in our households.

This was important, we were told, because our dogs would seek to take that “alpha” role from us. Now, after years of scruff shaking and “alpha rolling” our dogs unnecessarily, we have learned the truth. “Alpha Dominance” is one of the most persistent lies in all of what we know about dogs.

It’s amazing to me how a culture like ours, so rooted in science and technology, can hang on relentlessly to myths and half-truths that have an allure but no basis at all in fact. This belief that dogs have an instinctive drive for what is called a “dominance hierarchy” in their social structure has caused unnecessary conflict between humans and dogs and has, no doubt, resulted in the unnecessary death of many dogs. We commonly hear about “alpha dogs” and their problem behaviour and the stern, punishing methods, including death, that need to be employed to deal with them.

Having been around dogs most of my life, I have heard dog owners, breeders, and even trainers say things like “you can’t let the dog have control” or “you shouldn’t let the dog dominate you like that.” Before I took the time to catch up on current science about dogs and canine behaviour, I too believed that dogs had an agenda — not world domination necessarily, but that they jockeyed constantly for positions in some sort of hierarchical social structure that included both dogs and humans in a household or social situation. Imagine my surprise to discover that recent research shows the modern domestic dog is not a pack animal at all like its ancestor the wolf!

In their book Dogs, authors and researchers Raymond and Lorna Coppinger describe a compelling theory of the genetic evolution of wolves into the modern dog. Their theory describes the success of wolves with the shortest “flight distance” — the tolerance for the closest proximity of humans — in gaining access to the rich food sources in the garbage of early human settlements.

This evolution of dogs from packs of hunting predators to opportunistic scavengers is an important change. It is a change of survival tactics that seems largely responsible for the highly flexible and creative social capabilities of dogs. Dogs are a species that seems to be able to easily adapt to life, not just with other dogs but with other species too; not just with humans but cats, horses, livestock and a host of other animals they encounter in natural environments and in their lives with humans. 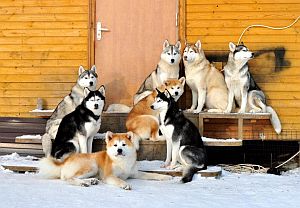 Observations in multi-dog households quickly reveal that “dominance” of one dog over another is not absolute. There is no one dog that always controls all situations all the time. It appears that resources, not instinct, dictates this behaviour we call “dominance.”

It is simply a question of which dog wants a particular resource more at any give moment. Those of you with more than one dog have seen your own dogs sharing toys. One day, one dog plays with a toy; one day, a different dog plays with it. The same is true for food. On a given day, your “food dominant” dog may not be feeling well or not hungry and will not push to the front to maintain his “alpha” position in the “pack.” It seems the social dynamics of dogs are much more fluid and based on access to resources, rather than any sort of hard-wired need for a position in a perceived social hierarchy system.

So why are we so hung up on this whole “alpha dominance” business? Part of the answer lies in some research performed by behaviourist Rudolph Schenkel in the 1940s. In his research, Schenkel put forward the notion of “dominant” and “submissive” wolves. This research has been largely replaced by more thorough and accurate research done in the past three decades.

Prominent Canadian wolf researcher David Mech offers a wonderfully in-depth look at the myth of the “alpha” even in wild wolf packs in his 2008 article “What Ever Happened to the Term Alpha Wolf?”. It turns out that the structure of wolf packs much more closely resembles human family units than the competing status seekers portrayed in the fictional stories of Jack London (Call of the Wild, White Fang).
What’s interesting to me is that human societies have always placed a high value on status systems and it’s quite possible that we have been projecting this onto our dogs. People keep pets for all kinds of reasons and it seems reasonable that we want to organize them into our own human conceptions of social hierarchies. It’s common to find trainers and books on dog training talking about “control” and keeping your dog in their place within the “pack.” As we now know, there isn’t really a “pack” – it’s more like a family. That’s a very different dynamic.

Perhaps if we focused on integrating our dogs into our families, rather than focusing on outdated and incorrect concepts like “pack leaders” and “asserting our dominance”, we might find more cooperative and satisfying relationships with our dogs. Do our dogs really have to be shown that they are our dependents? We put their food down, we let them out to do their business, we take them out for walks. In fact, every good and bad thing in their lives comes from us. 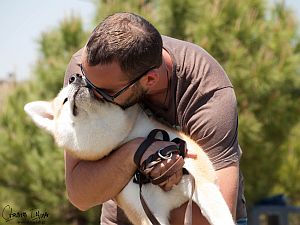 That said, our dogs are clever scavengers. They will try to get what they want. They will develop behaviours and strategies to get us to give them more of the things they want and to keep us from doing the things they don’t want. But isn’t that more like being an opportunist than a power-mad status climber? And if we fall for their strategies, isn’t that more our fault than theirs considering we have control of all of the resources?

Our dogs don’t want to be “pack leaders.” I have yet to meet a dog who cares when I eat or when I go to bed. They care very much when THEY eat or go for a walk. But that’s a different thing. A leader would want to control my actions, not just the ones that serve their desires and wants. That’s just a clever scavenger trying to get their stuff (e.g., food, water, exercise, play, attention, etc.).

With all the talk of “pack leadership” and “calm assertive energy” these days, I would suggest that we need to look at the facts about the social dynamics of dogs and treat them as they really are: members of our households who are very much our dependents. They are not competitors for any kind of status position in some imagined hierarchy. If we can turn our relationship with our dog from one of contention to cooperation, a whole new world of possibilities opens up.

We owe it to our dogs to take the time to understand who they truly are. They are with us every day and give us all they have. The least we can do is be good stewards and give them what they need too. Clarity, understanding, and a place in our family where they can feel safe and appreciated.