Read before you breed 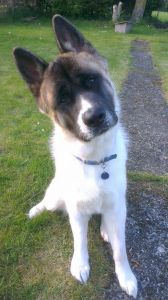 This is Teddy. He is an 11 month old American Akita. He spent the first 16 weeks of his life locked in a crate too small for him and had never been outside.

I took him for that situation and he know lives with me (some what) happily. I say "some what" not because he doesnt get the best in life, I do all I can for him and would jump of a cliff for him; but because of IRRESPONSIBLE BREEDING he has many health problems.

Teddy has a bone disorder called SCLEROSIS which has already taken effect ( AT 11 MONTHS) on both his front legs, he has elbow ELBOW DYSPLASIA and HIP DYSPLASIA and also his SPINAL PELVIS joint is so mobile that one slip or miss step could paralyze him at the moment. He has DISLOCATED his elbow twice in the past 9 days, not from running around but just from getting up and walking. He is on pain killers everyday and has to be crated, he is unable to go for walks or be off lead in his own garden at the moment. We are at the vets on a weekly basis for x rays and he is being referred to a specialist and will be having CT scans later this month.

To look at him you wouldn't see a problem, but under the skin is a different story!

SO BEFORE YOU BREED THINK! WOULD YOU WANT ONE OF YOUR PUPPIES TO SUFFER LIKE THIS? TO GO THROUGH WHAT TEDDY IS GOING THROUGH?? ALL HIS PROBLEMS ARE GENETIC!

Disclaimer: Owners experiences are published as they are sent to us, we don't edit, change, censor. Owners express their own opinions only and we can't be held responsible.