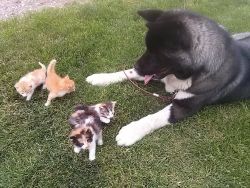 The paper by Bradshaw, Blackwell and Casey called “Dominance in domestic dogs – useful construct or bad habit?” reviews how the term dominance has been misappropriated in the context of domestic dog aggression. It is not a trait of a single animal nor is it a motivation for how they interact. It also discusses recent literature on wolf packs and feral dog packs.

In the popular press, it is easy to use terms such as dominance and pack. We need to remember that the word pack is just a name, just as a group of whales is a pod or a group of birds is a flock. Wolf pack theory evolved back in the 60s based on premise that dogs and wolves, being of the same species, act in the same way. As well, Dr Mech’s book (The Wolf: Ecology and Behavior of an Endangered Species) was published at this time. Unfortunately this data was based on observing an artificial wolf pack (a group of captive unrelated wolves). This led to the popularization of the terms such as alpha and dominance.

Although the science has evolved, it has proven difficult getting the public and many professionals such as dog trainers and veterinarians to accept the advances that have been made. Another frustrating aspect is how popular media has promoted the outdated theories through TV and the internet.

When wild wolf packs were studied, it was found that there was very little aggression as they were co-operative family groups containing parents and offspring. There is one breeding pair and other family members to help raise the pups. Dominance hierarchy would not work in this situation nor be genetically beneficial.

As well, understanding of the domestic dog has also progressed. Dogs have co-evolved with us for thousands of years. It began as scavenging waste from the settlements. Domestication followed and through the years humans identified and developed specific breeds for guarding, hunting and herding.

This paper is an important one for anybody who is interested in dog behaviour, whether they are veterinarians, trainers or the general public. The better we understand our dogs, the more respectfully and humanely we can interact with them.

The term "dominance" is widely used in the academic and popular literature on the behavior of domestic dogs, especially in the context of aggression. Although dominance is correctly a property of relationships, it has been erroneously used to describe a supposed trait of individual dogs, even though there is little evidence that such a trait exists. When used correctly to describe a relationship between 2 individuals, it tends to be misapplied as a motivation for social interactions, rather than simply a quality of that relationship.

Hence, it is commonly suggested that a desire ‘to be dominant’ actually drives behavior, especially aggression, in the domestic dog. By contrast, many recent studies of wolf packs have questioned whether there is any direct correspondence between dominance within a relationship and agonistic behavior, and in contrast to wolves, hierarchical social structures have little relationship with reproductive behavior in feral dog packs. Nor do the exchanges of aggressive and submissive behavior in feral dogs, originally published by S. K. Pal and coworkers, fit the pattern predicted from wolf behavior, especially the submissive behavior observed between members of different packs.

In the present study of a freely interacting group of neutered male domestic dogs, pairwise relationships were evident, but no overall hierarchy could be detected. Since there seems to be little empirical basis for wolf-type dominance hierarchies in dogs, the authors have examined alternative constructs.

Parker’s Resource Holding Potential (RHP) appears to be less useful when applied to domestic dogs than to other species, although it has the advantage of incorporating the concept of subjective resource value (V) as a factor influencing whether or not conflicts are escalated. The authors propose that associative learning, combined with V, can provide more parsimonious explanations for agonistic behavior in dogs than can the traditional concept of dominance.