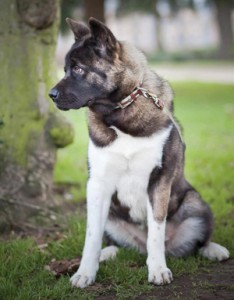 The annual Britain’s Next Dog Model competition – coordinated by grooming, training and healthcare experts, Mikki – has crowned its winner. An Akita called Flora beat over 400 other entrants to secure her title. Flora will receive a photo-shoot with top UK dog photographer, Nick Ridley, a hamper full of Mikki goodies and will become the ‘face’ of Mikki for the next year.

The public voted for their favourite entrants via Facebook and the ten dogs with the most votes were taken through to the next round. A prestigious panel of judges, including UK Groomer of the Year 2012 Alison Rogers, pet behaviourist Claire Arrowsmith and representatives from PetPlanet, The Blue Cross and Mikki, then placed their votes in order to select a winner and two runners-up. Having voted Flora as the winner, the judges elected a German Spitz called Taz and a cross-breed called Archie as the runners-up.

The competition attracted dog lovers from all over the country, competing for their pet to be awarded this prestigious title.

Harry Scott, Brand Manager for Mikki explains, “This was the third year for Britain’s Next Dog Model, which really has become a highlight of our year. We were blown away by the standard of entries this year and I know that the judges had a tough time placing their votes when all ten finalists were so strong. We delighted in looking through all the entries and we hope that the entrants and voters enjoyed the competition as much as we did. The aim of Britain’s Next Dog Model is to promote both healthy grooming and responsible pet ownership, and the range of fantastic entries certainly helped us do this. Huge congratulations to Flora – we look forward to having her as the face of Mikki for the year ahead!”

The hardy Akita breed can be traced back to the mountains of northern Japan. Today they make brilliant pets that form close bonds with family members. Flora is a fantastic example of her breed and her work in units for children and young people who have been excluded from mainstream school makes her a very deserving winner.

Her owner, Robert Stuhldreer from London, is incredibly proud of Flora. He explains, “Flora is a fabulous 15 month old Akita with a temperament to die for. Not only a shining star in the show ring, she also works very hard as a Blue Cross Education Dog. Her role involves going into schools, youth groups and Pupil Referral Units helping to teach young people to act responsibly towards and around dogs. When we entered Britain’s Next Dog Model 2013 we were thrilled to get through to the last ten. I was quite overwhelmed to learn that Flora was selected as the overall winner by an expert panel in the second round. We both very much look forward to the coming year with Flora being the “face” of Mikki.”

The competition was launched on the 11th March, from which date entrants were invited to submit their dog’s photo and information, including a short summary of why they thought their dog should win, using the app on the Mikki Facebook page. Both entrants and the general public were invited to vote for their favourite entries. Over the course of the next three weeks over 400 dogs were entered, 3,300 votes were cast and the ten finalists were revealed. On the 8th April the results of the judges’ voting round were announced and the winner and runners-up were named.