He who hated akitas 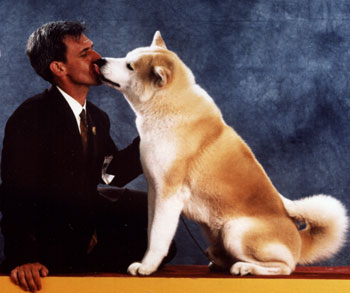 It is doubtful if Richard Hellman ever envisioned making dog show history with a breed he didn't like. "I ridiculed them and fought against the Japanese Akita for years. I was living in Europe during the mid-80s and the quality at that time was very poor; there was nothing about them that appealed to me. To my mind, the only real Akita was the American Akita." But that was soon to change.

"A few years later I noticed an advertisement in Akita World magazine that caught my eye. Sandy Foster in Illinois was producing Japanese-type dogs from American stock that had come down from the last importations before the AKC closed the studbooks to Japan. Photos showed the dogs were of surprising quality — they had the exotic Japanese expression but possessed great bone strength and excellent structure." Though Foster had a lengthy waiting list, she and Richard struck up an immediate friendship via phone and fax. After several months of correspondence, Foster shocked Richard by offering him not one, but three select specimens.

"She was moving to California with Ben and Melanie Herrera (Kobun Akitas) and needed to place dogs. With my father's help I put the money together to buy them and was soon on a plane to St. Louis to pick them up. When I returned to Italy nobody believed I'd switched to the Japanese type, but these three dogs — Shinzo, Hanako and Tatsuko — eventually became the foundation of my own 'No Shatsuko' breeding program."

Shortly afterwards Hellman received a phone call from the Herreras, asking if he would be interested in another Japanese-type male. A young dog named Seihoh of Juntai Doh had been shipped to Kiyoshi Yamazaki, a martial arts master living in Los Angeles, who trained such celebrities as Arnold Schwarzenegger. Seihoh had lived with the Yamazaki family for nearly two years and had caught the eye of the Herreras when he was first shown at a local AKIHO event.

The Herreras had already been offered Seihoh, but with the American Kennel Club not recognizing Japanese KC pedigrees, he was of no use to them. Hellman continues, "The Herreras contacted me and asked if I wanted him. Japan had entered the FCI and of course Italy was already an FCI country. All it took was one photograph, and I was on a plane as soon as I could get to the airport!"

Ironically, a few months later the AKC voted to accept JKC pedigrees for registration purposes; by that time Seihoh and Richard had begun to cut a swath of wins that would eventually cover all of Europe. Among his victories were the following:

World Winner 1995 and 1999; World Winner & Group 1st 1996; World Winner & BIS 3rd 1997
European Winner 1993; European Winner & Group 3rd 1994; European Winner & BIS 2nd Copenhagen
56 Championship/Winner titles in 22 countries; 20 National Champion titles; 26 international Best in Show wins, including BIS at the 1996 Collare D'Oro Invitational; Winner of Groups in 15 countries; Group placements in 22 countries
In the closing months of 1998 Seihoh made a brief return to the US to obtain his American championship; in doing so he earned multiple Group placements, BOS in Veteran Sweeps at that year's ACA National Specialty and an Award of Merit the following year at Westminster under breeder-judge Beverly Vics. Hellman is proud of the fact that Seihoh's "breed wins in the US all came from the classes. His only show as a special was Philadelphia; he won BOB that day under Virginia Hampton, who was the first AKC judge to award BIS to an Akita after the breed was officially recognized."

Richard adds that "Like many great dogs, Seihoh has been the topic of discussion and criticism. There were many who felt him lacking in modern breed type; some claimed his color could have been richer. But the fact remains that hundreds of judges from all five continents — including many experts from Japan — have all confirmed Seihoh is the top-winning Akita of all time and perhaps one of the most successful show dogs of any breed." Richard adds further testimony to the dog's enduring quality, saying, "He obtained his first CAC for his Croatian title at the age of 3 years; I never bothered to finish him there, so at the age of 12 I took him to Zagreb on a lark to get that final CAC and ended up winning Reserve BIS. His championship titles in Monte Carlo and San Marino were also won with Best in Shows."

And yes, there is truth to a certain urban legend surrounding this great dog and his best friend. "All of this began with a piece of cheese," states Hellman. "I took a kilo of the best Parma cheese to California as a gift for Mr. Yamazaki — and in the end that was all he would accept in exchange for a dog who would make his mark and become a legend."

In Greece we are lucky to have descendants of Seihoh: